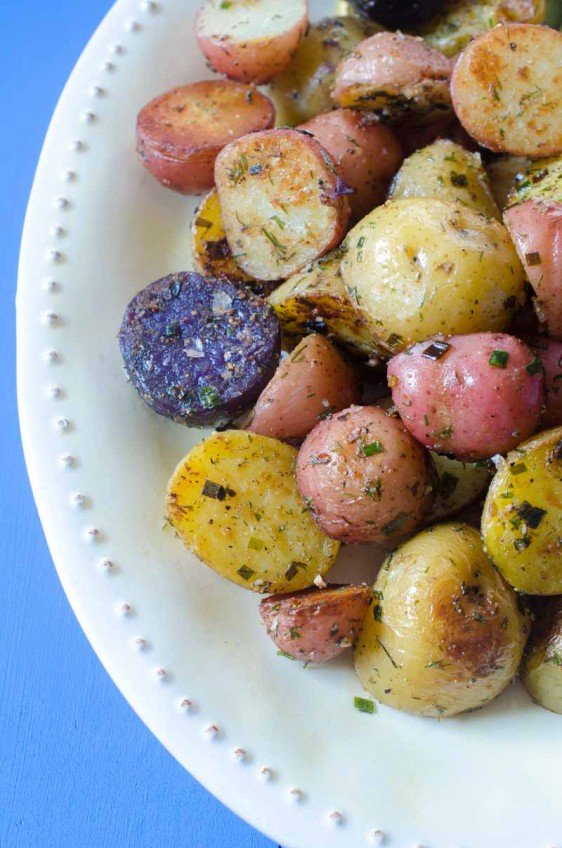 Pressure Cooker Potatoes are fluffy and tender on the inside and browned and crispy on the outside and tossed with herbs. You’ll be obsessed!

Guys, I am kind of obsessed with these Pressure Cooker Potatoes. Family and friends will tell you that potatoes have always bee  obsessed with potatoes. I’m kind of the potato girl. Usually, though, it’s the mashed or french fried variety. Now, with the pressure cooker in my life, these potatoes are quickly becoming my favorite weeknight meal side dish.

How do you cook potatoes in the pressure cooker?

Guys, it could not be easier to cook potatoes in the pressure cooker. You will need to use a steamer basket or trivet to hold the potatoes while they cook.

As far as liquid goes, you need to have some when you cook with a pressure cooker. If you don’t have the right amount of liquid, there will be no steam, thus no pressure. For this recipe, I use one cup of water.

How long does it take to cook pressure cooker potatoes?

My pressure cooker (I use the Instant Pot) has been a life saver. It makes the BEST hard boiled eggs. I love the way it makes cooking brown rice a breeze. And it is FABULOUS for making Kalua Pork cutting down the time from 16 hours in the slow cooker to just two in the pressure cooker.

Like I said it’s a time saver and this recipe is no exception.

If you are a fan of potatoes that are crispy on the outside and light and fluffy on the inside, then you too are going to love these Pressure Cooker Potatoes too. They don’t take long to cook at all. I cook them for 5 minutes on high pressure and then do a 10 minute natural release. 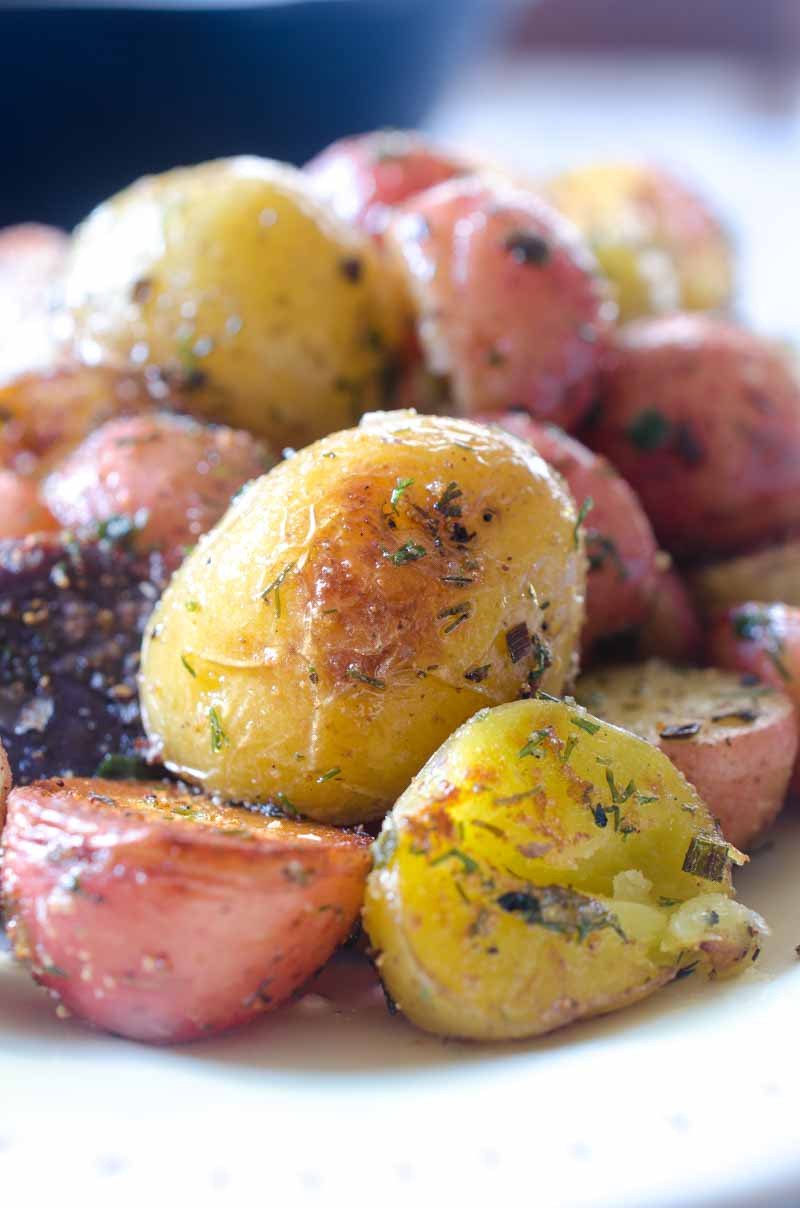 The potatoes would be perfectly tender and fluffy if eaten right out of the pressure cooker, but I like a little bit of a crisp to them. For this reason, I added them to a skillet with a little oil, butter and herbs to give them a bit of that golden crust. 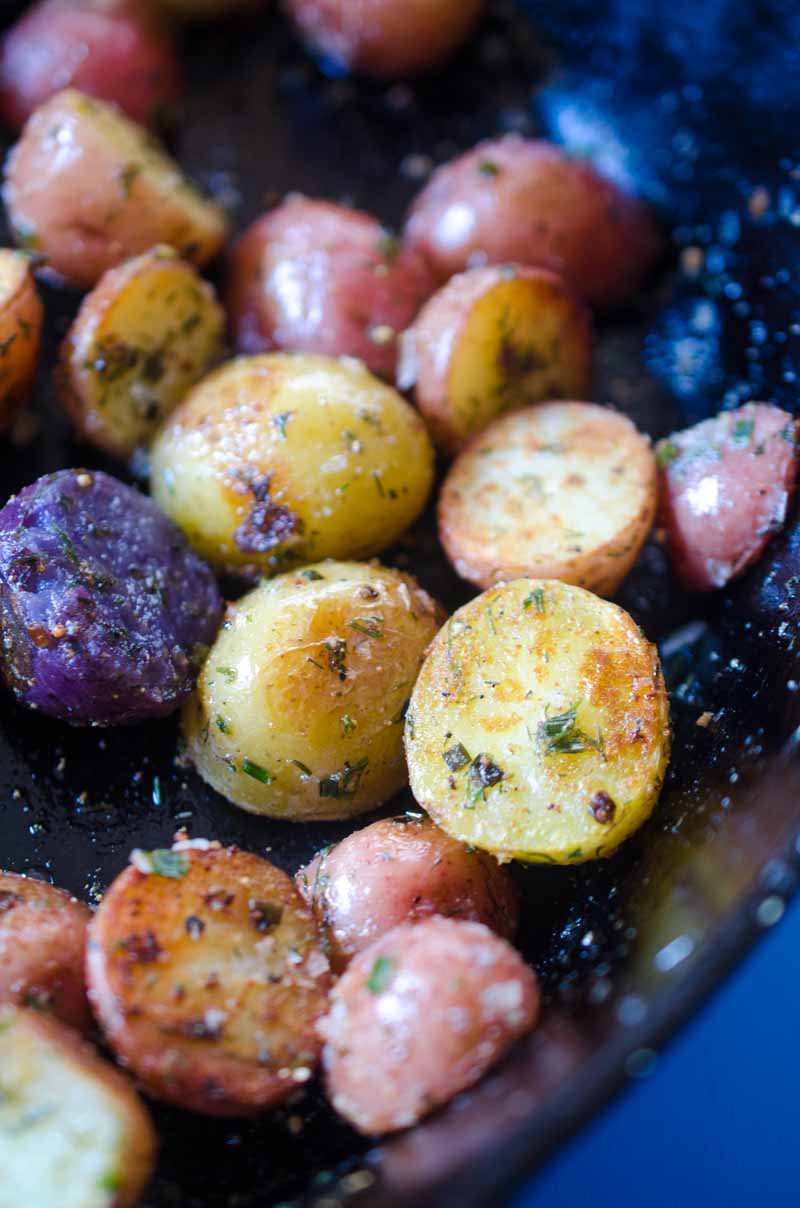 Which variety of potatoes do you use to make pressure cooker potatoes?

As far as herbs go, I chose to use dill and chives. I think the two work really well together and give a bright flavor. Freeze dried herbs that worked great for this.

I love using freeze dried herbs because they give you lots of freshness like fresh herbs but they last SO much longer. I have seen a few different brands but I happened to pick up the Litehouse herbs at Costco. I’ve been using them in everything. They make a great addition to dressings, sprinkled in pasta and of course, sprinkled on these Pressure Cooker Potatoes.

Pour water into the bottom of a pressure cooker fitted with the steamer insert. Place potatoes in the steamer.

Set the pressure cooker to 5 minutes under high pressure.

Heat butter and oil together in a skillet. Once the butter melts, carefully add the potatoes to the pan. Stir to coat.

Sprinkle chives and dill over the top and toss to coat. Season to taste with salt and pepper. Continue cooking until potatoes are browned, about 5 minutes. Serve immediately.

Nutrition facts not guaranteed to be accurate.