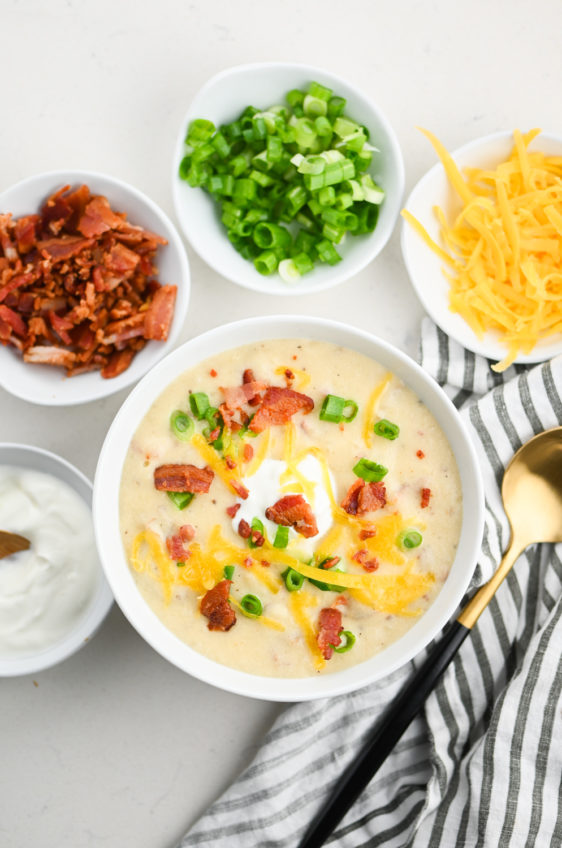 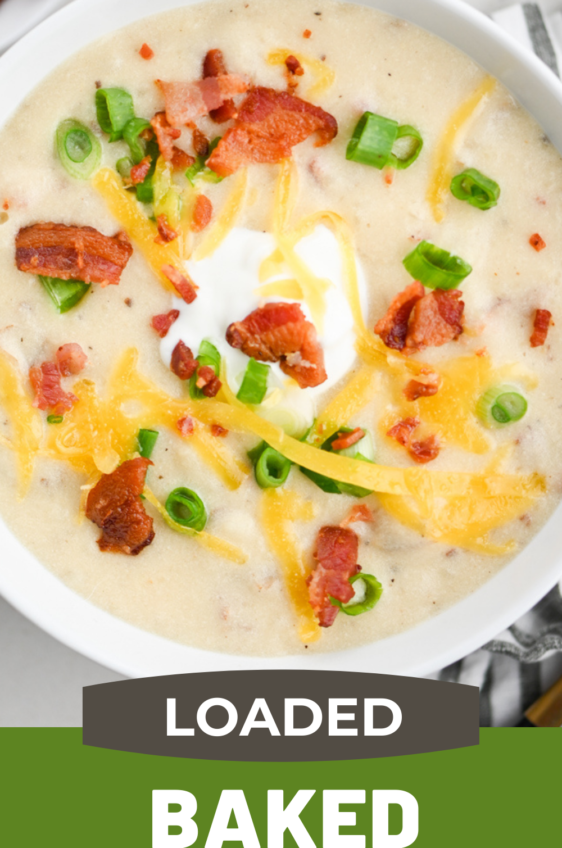 Loaded Baked Potato Soup has all of the deliciousness of baked potatoes in soup form. A comforting soup perfect for cold winter days.

If you are looking for the perfect way to warm up on a cold winter’s day, look no further than this Baked Potato Soup. It is loaded with baked potatoes, cheese, bacon, sour cream. Basically all of the goodness that you get from a loaded baked potato is packed into this soup.

And it is delicious.

It’s hard to find a soup that my kiddos will gobble down. Sure they love Chicken Noodle and this Ham and Potato but that is about it. Until now, they loved this Loaded Baked Potato Soup as much as my husband and I did. Win!

When you think about the ingredients you need for Loaded Baked Potato Soup, think about all of the things that you put on your loaded baked potato

BAKED POTATOES: You’re going to need to plan in advance since you’ll need precooked baked potatoes for this. You could also make them in the microwave in a pinch! As far as peeling goes, I like the texture that leaving the skins on the potatoes give the soup. If you want a creamier texture, peel the potatoes.

BACON: You’ll need about 6 – 8 slices depending on whether or not you want some for a garnish.

BUTTER: Can’t have a baked potato without it right?!

YELLOW ONION: You’ll sauté the onion in the bacon grease. It’ll give the soup a lot more flavor.

FLOUR: This is what will help thicken the soup.

LOW-SODIUM CHICKEN BROTH: I like to use low-sodium chicken broth because it helps you control the salt content of the soup.

WHOLE MILK: For the creaminess.

CHEDDAR CHEESE: Freshly shredded cheddar is going to be the best, it’ll melt the best. Medium or sharp is perfect.

GREEN ONIONS: Loaded baked potatoes always come with chopped green onions or chives on top so this hearty soup gets a sprinkle of them before serving.

Step by Step Photos and Instructions

STEP #2: Add onions and sauté until they have softened a bit, about 3 minutes. Add 3 tablespoons of flour to the pan drippings.Whisk and cook one minute over medium heat

STEP #3: Whisk in the chicken broth. Slowly, whisk in the milk. Cook for 2-3 minutes or until the milk is warmed through. Add potatoes to the pot. If you’re using an immersion blender, carefully blend the soup to desired creaminess.

STEP #4: Add in cheddar and sour cream. and stir until cheeses have melted. Return the bacon to the pot (reserving some for toppings if desired) Simmer on medium-low heat for 35-40 minutes or until the soup thickens. Stirring occasionally. Adjust seasoning with salt and pepper. Ladle into soup bowls and top with green onions, bacon and more cheddar.

This soup will get considerably thicker as it cools. If this happens whisk in a bit more milk.

I served this soup with bread and garlic butter. It was perfect on a cold night!

Note: This post was originally published in 2009. It was updated in 2022 with a new recipe, photos and nutrition information. 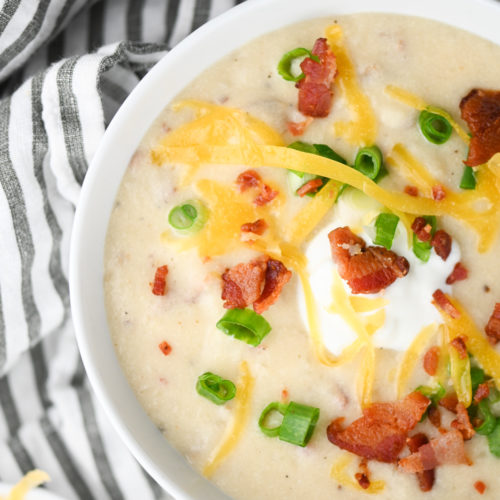 This recipe uses baked potatoes that were prepared in advance. To do this: scrub the baking potatoes, pierce with a fork  a few times. Bake in a 400 degree oven for 45-50 minutes or until soft. Cooking the flour for a minute or so helps prevent your soup from having a pasty taste so don’t skip this step.  If you want a smoother soup, use an immersion blender.  Leaving the skins on the potatoes will add a different texture to the soup.  Try not to let the soup boil as doing so will cause it to separate.  Nutrition information for estimation purposes only.