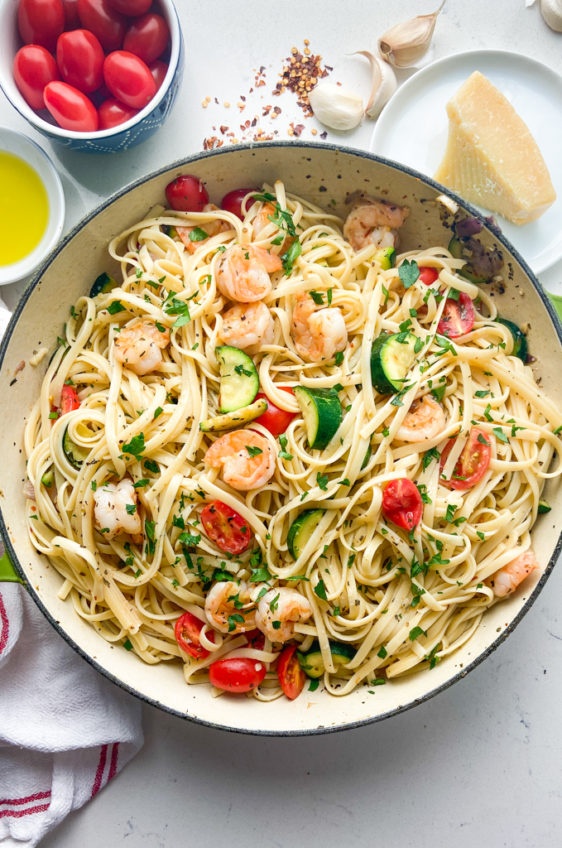 Shrimp Linguine with Zucchini and Tomatoes 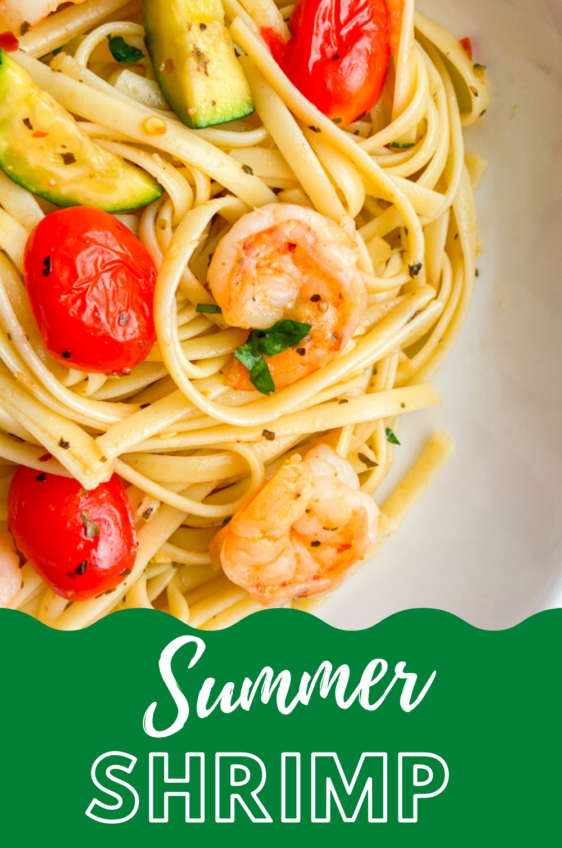 This Shrimp Linguine with Zucchini and Tomatoes is the ultimate summer pasta! Pretty enough for a special occasion, easy enough for weeknight dinner.

You guys, this is my absolute favorite pasta to make during the summer. I’ve been making it since I was a teenager. It is so easy. So flavorful and absolutely perfect for a summer dinner out on the patio.

It is light yet filling. There is shrimp, red onion, tomatoes, zucchini, crushed red peppers and loads of garlic. I could eat this pasta every day, friends. Seriously. 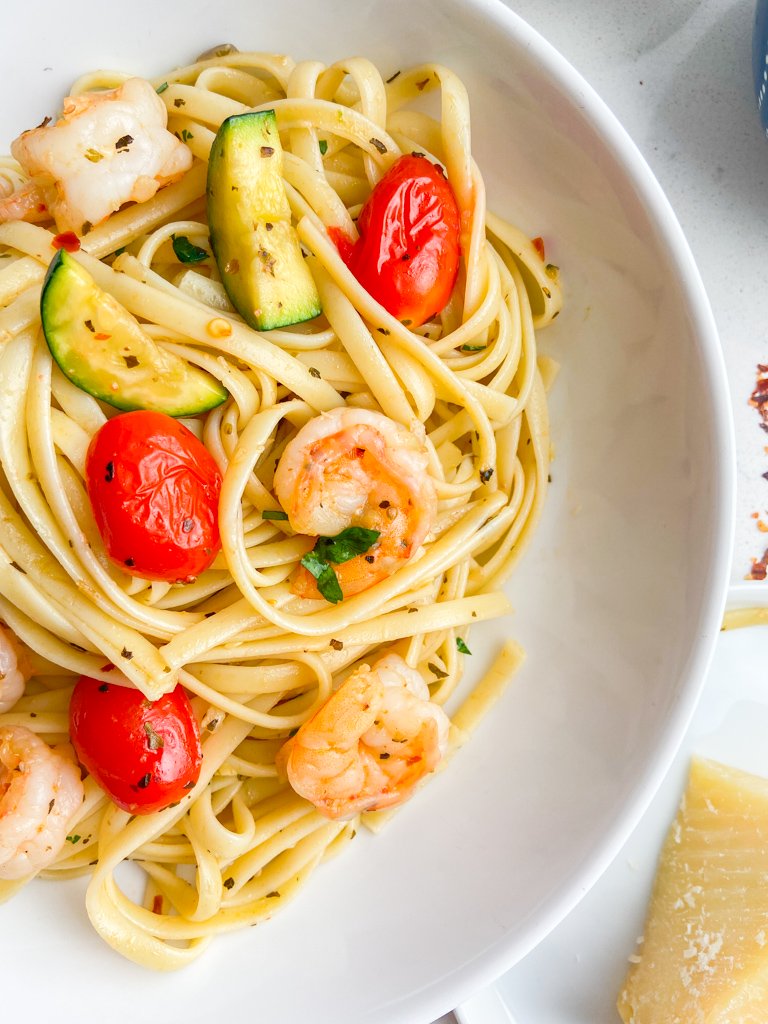 What ingredients do you need to make shrimp linguine?

I have tried this shrimp linguine with many different veggies over the years, but the combo that I always come back to is zucchini and tomatoes. They just keep it so light and fresh! 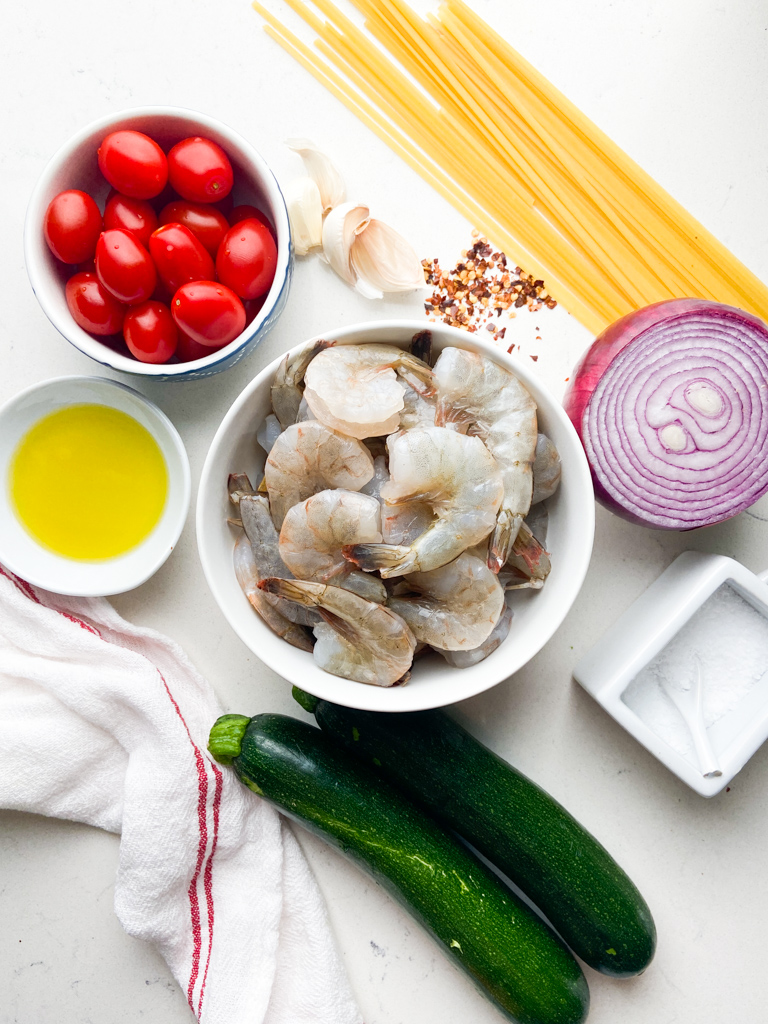 SHRIMP: Shrimp is measured in how many there are per pound.  For this recipe  I use  35 – 40 count shrimp which means that there are about 35 – 40 per pound.  This size is considered “medium”. You’re going to want to make sure they are peeled and deveined.

DES’ TIP: You can use fresh or previously frozen shrimp for this. I like ti buy shrimp labeled “easy peel” this means that it has already been deveined and it makes cooking with shrimp so much easier!

ZUCCHINI: One or two medium sized zucchini is perfect for this recipe. If they are particularly large one is enough.

CHERRY TOMATOES: I recommend cutting them in half to make it easier to eat in this pasta.

GARLIC: The garlic in this dish is a must! You’ll need some to marinate the shrimp as well as to cook with the veggies. The recipe calls for 6 cloves, feel free to use more you like!

DRIED BASIL AND OREGANO: I prefer to use dried in this recipe because they end up being cooked for several minutes with the vegetables. If you want to add fresh chopped basil over the top of the finished pasta, that would add an extra burst of summer flavor.

CRUSHED RED PEPPER: This adds a little kick to the dish. Use as little or as much as you like. If you are serving people who are sensitive to heat, just put some on the table to add after for those that want  to.

DRIED LINGUINE:  Linguine is my pasta of choice for this recipe however, any long noodle will work.

SALT: Don’t forget to season your pasta water too!

PARMESAN: Plenty of freshly grated Parmesan (no canned stuff here!)  over the top at serving is a must! 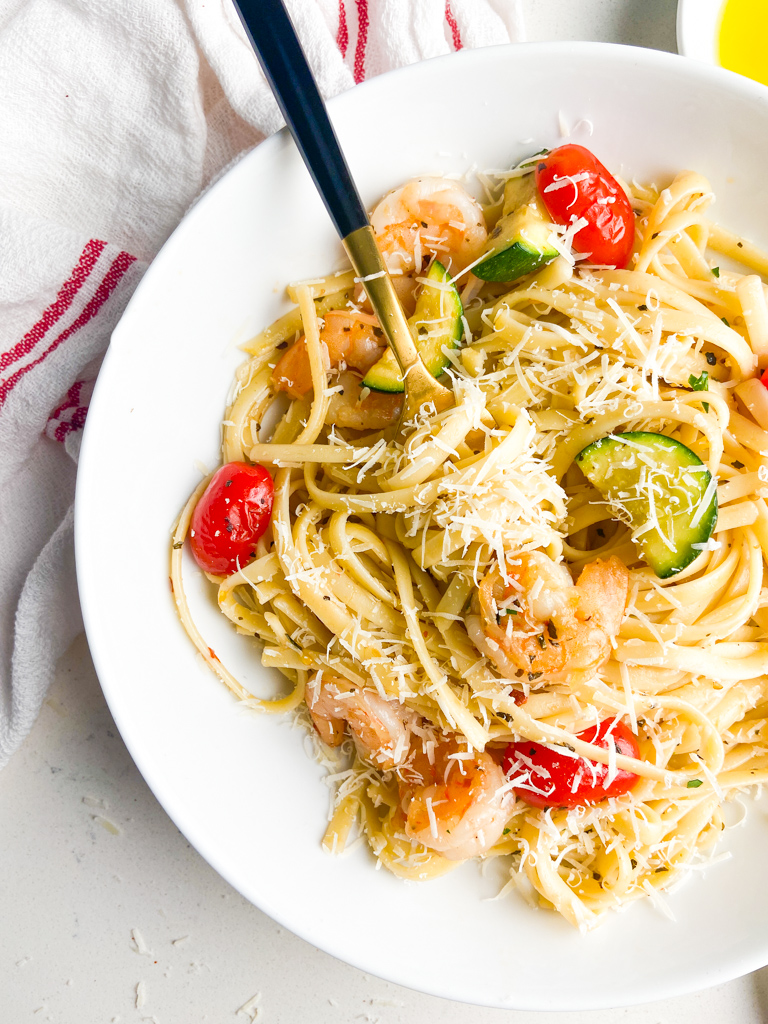 How do you make Shrimp Linguine?

One of the things I love about the dish is how quickly it comes together. I do recommend allowing the shrimp to marinate for about 30 minutes  before cooking. That being said, if you’re short on time a quickly toss the shrimp with the marinade mixture right before you start your noodles. It’ll still give them great flavor. 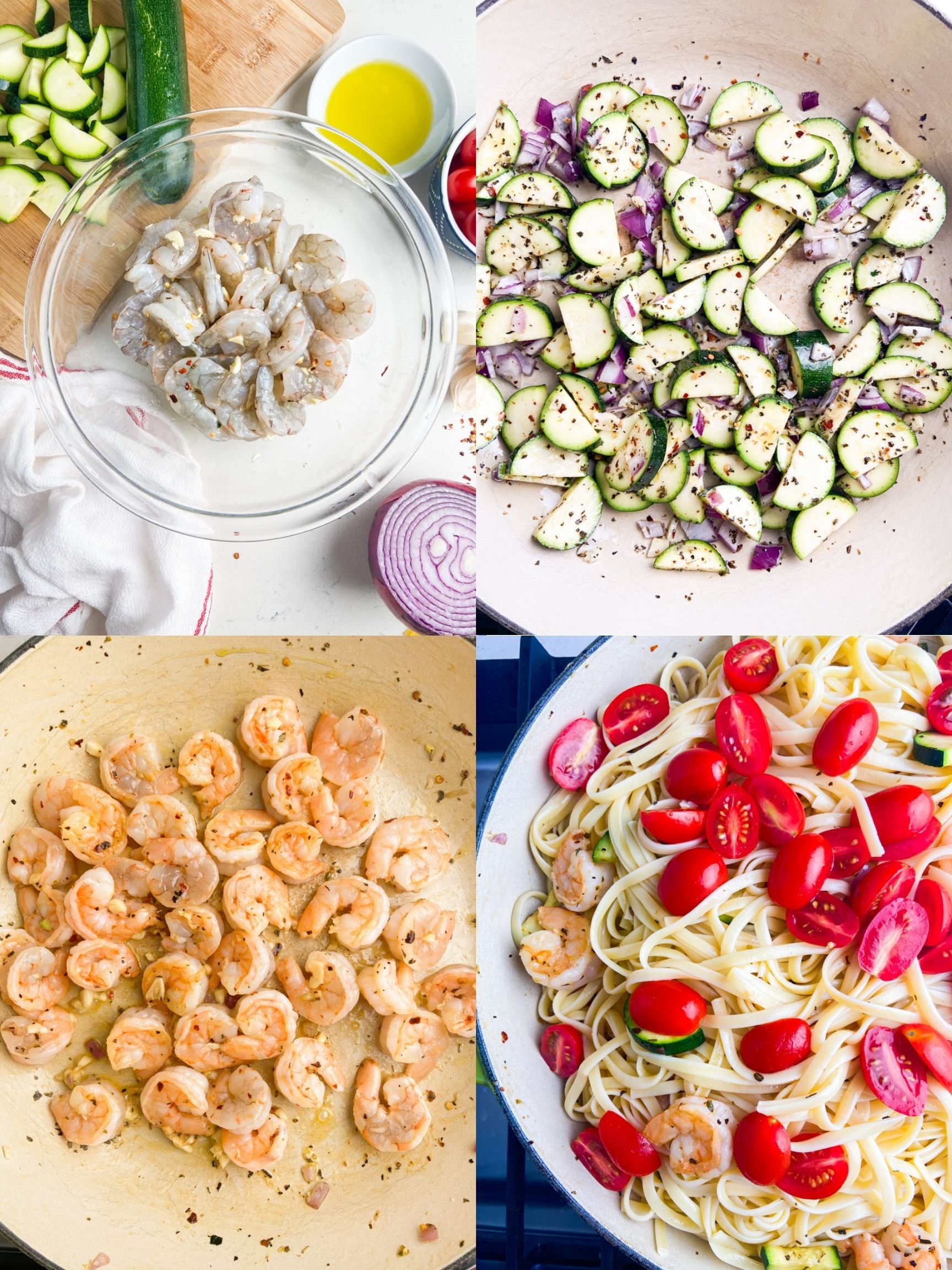 STEP #4:  Add zucchini and onions and cook for 3 minutes. Remove and set aside.

STEP #6: Return the vegetables to the pan, add in the linguine and  tomatoes. 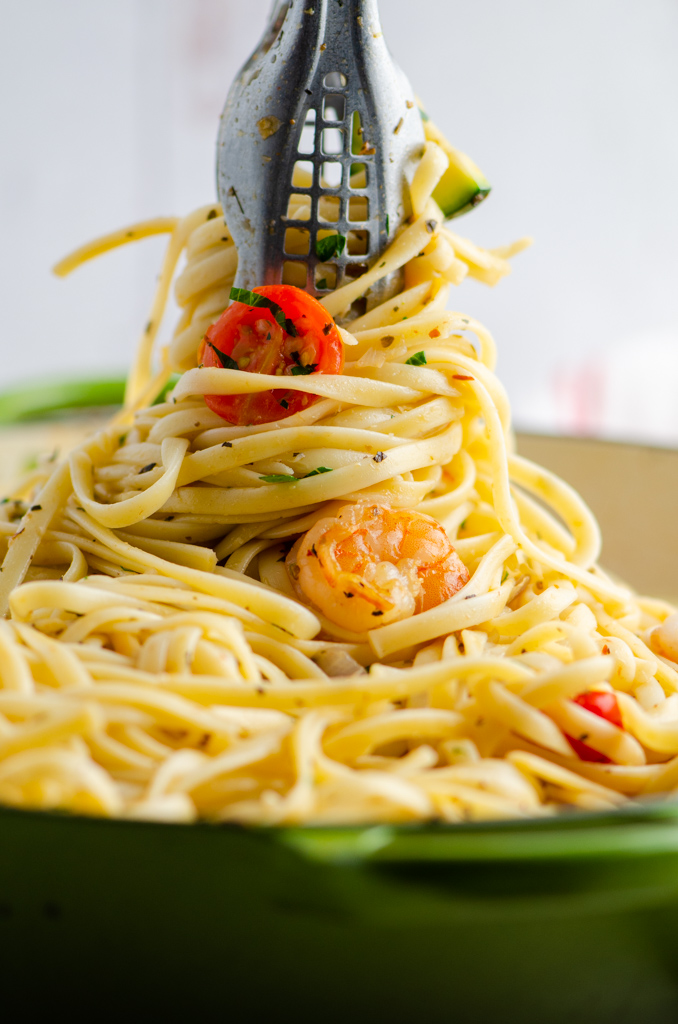 DES TIP: Adding the tomatoes at the end is one of the keys to this recipe, If added too early, they get soft, lose their shape and make more of a tomato sauce. Added at the end, they hold their shape but are still tender and juicy.

This Shrimp Linguine recipe really is one of my all time favorite dishes. My family loves it too. Give it a try this summer, I’m sure you’ll love it! Pair it up with a fresh garden salad and the best and easiest garlic bread. 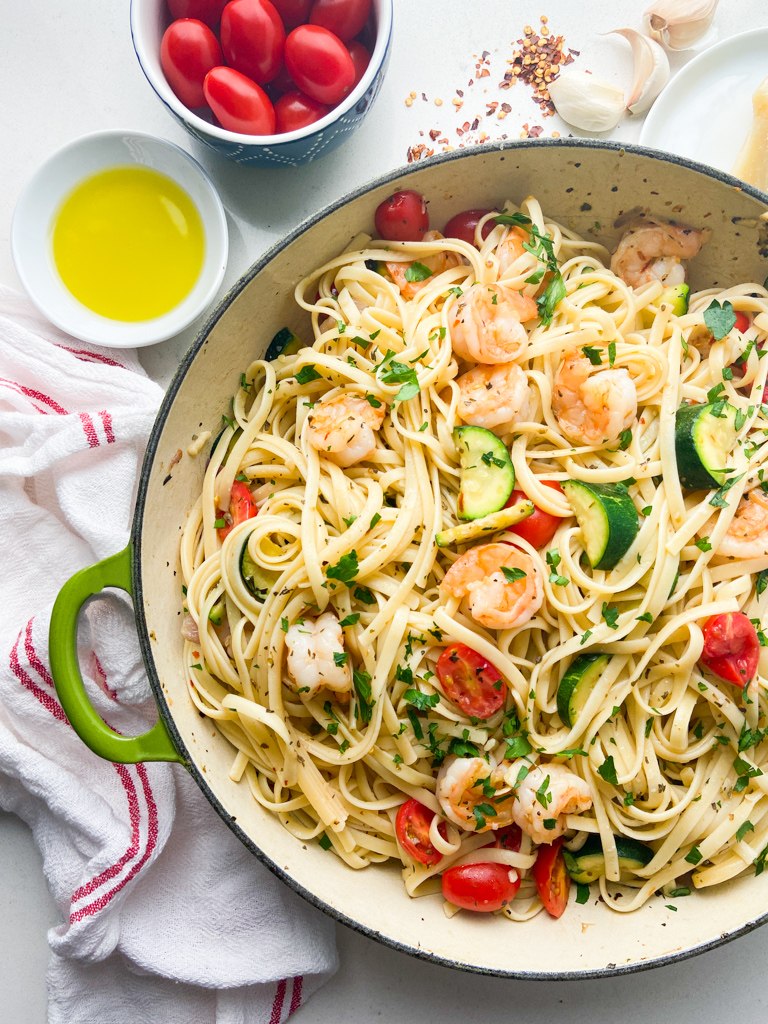 Looking for more shrimp recipes? Here are some of my most popular:

Note: This post was originally published in 2008. It was updated with  new photos, step by step instructions, recipe modifications and nutrition information in 2021. 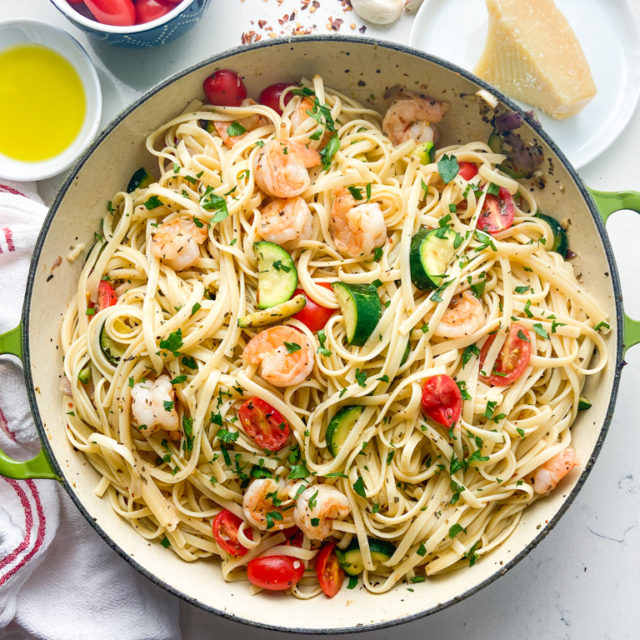 Shrimp Linguine with Zucchini and Tomatoes

Nutrition facts for estimation purposes only.